Official Proceedings of the One Thousand Four Hundred and Third Meeting of the Board of Trustees, Columbus, Ohio, May 7, 2004 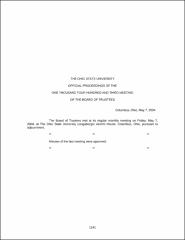 This item is the meeting minutes of the Board of Trustees of The Ohio State University held on May 7, 2004 at the Ohio State University Longaberger Alumni House, Columbus, Ohio. The meeting began with the Election of Officers for the Board of Trustees, after which Mr. Sofia gave the Chairman's Report. President Karen A. Holbrook gave the President's Report and Paul M. Schanz received the Student Recognition Award. The consent agenda included the following resolutions: Amendments to the Bylaws of the Board of Trustees, Regional Campus Boards Reappointments, James Cancer Hospital Board Reappointment, Amendments to the Medical Staff Bylaws and Rules and Regulations of The Ohio State University Hospitals East, Establishment of a One-Time Separation Incentive Program for The College of Food Agricultural and Environmental Sciences, Appointments to the Engineering Experiment Station Advisory Committee, Naming of The Learning Center, Naming of Internal Spaces, Personnel Actions, Resolutions in Memoriam, Report of Research Contracts and Grants, Report on University Development, Waivers of Competitive Bidding Requirements, Request for Design and Construction Contracts and a Joint Use Agreement, and Purchase of Real Property (for 221 Taylor Avenue, Columbus, Ohio). Mr. William J. Shkurti and Provost Snyder presented on the Fiscal Year 2003-04 Third Quarter Budget Report, followed by the Amended FY 2004-05 Columbus Campus Undergraduate Tuition resolution. Mr. Sofia presented some final remarks as his final meeting as Chairman. The appendices included processes, budgets, building plans, and maps that were not already present in the minutes.