Official Proceedings of the One Thousand Three Hundred and Ninety-Fourth Meeting of the Board of Trustees, Columbus, Ohio, May 30, 2003 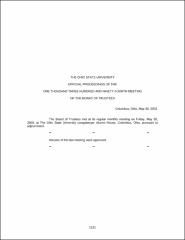 This item is the meeting minutes of the Board of Trustees of The Ohio State University held on May 30, 2003 at the Ohio State University Longaberger Alumni House, Columbus, Ohio. Mr. Sofia began by introducing new trustees and gave the Chairman's Report. President Karen A. Holbrook gave the President's Report, focusing on undergraduate research. The Student Recognition Award was presented to Chad Endsley. The Distinguished University Professor Awards were presented to Professors Kevin R. Cox, Brian D. Joseph, and Eric Herbst. The consent agenda included the following resolutions: Appointments/Reappointments to Boards, Amendments to the Bylaws of the medical Staff of The Ohio State University Hospitals, Regional Campus Boards Appointments, Acceptance of the White Paper of the Federation of the Colleges of the Arts and Sciences and its Recommendations, Naming of Building, Naming of Building, Honorary Degrees, Degrees and Certificates - Spring Quarter Commencement, Personnel Actions, Report on University Development, Amendments to Transportation and Parking Regulations, Capital Projects, 2003-2004 Graduate and Professional Tuitions General and Student Activity Fees and Other Selected Fee Increases, and Authorization Issuance and Sale of General Receipts Commercial Paper Notes, Series E of The Ohio State University. The appendices included processes, budgets, building plans, and maps that were not already present in the minutes.