Official Proceedings of the One Thousand Three Hundred and Ninety-Third Meeting of the Board of Trustees, Columbus, Ohio, May 2, 2003 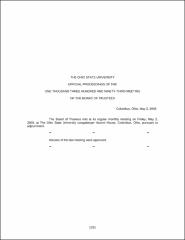