Official Proceedings of the One Thousand Three Hundred and Ninety-Second Meeting of the Board of Trustees, Columbus, Ohio, April 4, 2003 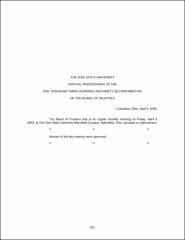 This item is the meeting minutes of the Board of Trustees of The Ohio State University held on April 4, 2003 at The Ohio State University Mansfield Campus, Mansfield, Ohio. Mr. Sofia, the Vice Chairman, made announcements in the place of Mr. Patterson, who was recovering from heart bypass surgery. President Karen A. Holbrook made the President's Report, focusing on the Mansfield Campus' recent growth and barriers for public universities. The Student Recognition Award was presented to Marianne F. Williamson. Dean John O. Riedl presented on Mansfield Campus. Barbara R. Snyder presented on the Compensation Benchmarks. The consent agenda included the following resolutions: personnel actions, Resolutions in Memoriam, Report of Research Contracts and Grants, Report on University Development, Capital Projects, Adoption of The Ohio State Mansfield Regional Campus Master Plan, Adoption of The Ohio State Marion Regional Campus Master Plan, Adoption of The Ohio State Newark Regional Campus Master Plan, and FY 2002-03 Budget Rescission. The appendices included processes, budgets, building plans, and maps that were not already present in the minutes.