Official Proceedings of the One Thousand Three Hundred and Eighty-Ninth Meeting of the Board of Trustees, Columbus, Ohio, December 6, 2002 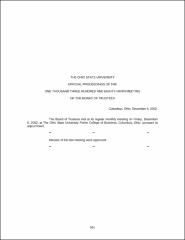 This item is the meeting minutes of the Board of Trustees of The Ohio State University held on December 6, 2002 at the Ohio State University Fisher College of Business, Columbus, Ohio. The election of David O. Frantz as Secretary of the Board of Trustees was proposed and resolved. President Karen A. Holbrook discussed the "Update November" and presented an Expression of Support for the football team and coaches. Dr. C. Bradley Moore presented the Presentation on Research - Driver for the Academic Plan. Courtney Howard was presented the Student Recognition Award. The consent agenda included the following: Naming of Learning Center, Naming of Optometry Research Clinic, Amendments to the Rules of the University Faculty, Honorary Degrees, Degrees and Certificates - Autumn Quarter Commencement, Personnel Actions, Resolutions in Memoriam, Report of Research Contracts and Grants, Report on University Development, Employment of Architects/Engineers, Amendment of Alternative Retirement Plan, Establishment of a New Self-Insurance Trust, Annual Audit and Financial Report, and Acceptance of the Report of Audit for 2001-02. The appendices included processes, budgets, building plans, and maps that were not already present in the minutes.