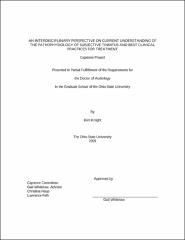 Subjective tinnitus is commonly experienced, especially by those with hearing loss. It is generally agreed that neural plasticity underlies the pathophysiology of subjective tinnitus. Studies from audiology/hearing research and cognitive neuroscience/neuropsychology are reviewed to illuminate current understanding of the pathophysiology of tinnitus. Research has revealed hyperactivity (increased spontaneous firing rate) in the dorsal cochlear nucleus, inferior colliculus, and other locations in the auditory system. Reduced inhibition related to sensory deprivation at the cochlear level is thought to underlie hyperactivity in auditory structures. Increased neural synchrony is also noted, and may be a correlate of hyperactivity. Reorganization of cortical tonotopic maps is seen in subjective tinnitus, as is reorganization of visual and somatosensory cortical maps with sensory deprivation in those modalities. Non-classical pathways branching from the inferior colliculus and thalamus to the amygdala may be involved in bothersome tinnitus. Providing evidence-based practice for the treatment of subjective tinnitus remains challenging. Current and emerging treatments are reviewed and recommendations for best practice based on research and clinical trial outcomes are discussed.