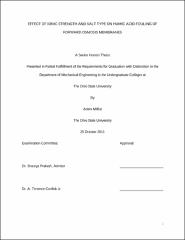 The effect of ionic strength and salt type on humic acid (HA) fouling of forward osmosis membranes was systematically investigated. A permeation cell was used to produce an osmotic flow of working solution from the dilute HA feed solution to the concentrated draw solution. Two forward osmosis membranes were tested to determine the dependence of fouling on membrane type. A nanocapillary array membrane with nominal pore size of 10 nm was also used but did not produce an osmotic flow due to the diffusion of salts through the larger membrane pores. 0.5 mM and 5.0 mM KCl and CaCl2 feed solutions were used to determine the effect of ionic strength and salt type on humic acid fouling. Average flux data from baseline experiments with zero HA was compared to average flux data from experiments containing 10 mg/L of HA, with no measurable effect observed. Ionic strength of the feed solution was shown to affect the average trans-membrane water flux with higher average fluxes found for the 0.5 mM feed solution compared to the 5.0 mM feed solution. Salt type was shown to affect the average trans-membrane water flux and was found to be dependent on the membrane type. Internal concentration polarization was determined to be the primary cause for decreased average fluxes at high ionic strengths, while HA fouling was determined to depend on the composition of the working solution. Despite not always having higher initial average fluxes, CaCl2 working solutions always resulted in larger percent reductions of average flux which could be evidence of increased HA fouling in the presence of Ca2+ ions. This result agrees with previous findings of HA fouling in membrane processes.