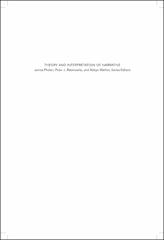 Theory and interpretation of narrative series

Fact, theory, and literary explanation -- The concept of genre in eighteenth-century studies -- Literary permanence and critical change -- Literary constructs : experience and explanation -- Literary form in factual narrative : the example of Boswell's Johnson -- The dramatic monologue and related lyric forms -- Notes on some structural varieties and variations in dramatic "I" poems and their theoretical implications -- Defoe, Richardson, Joyce and the concept of form in the novel -- The emergence of the novel in England : genre in history vs. history of genre -- From Richardson to Austen : "Johnson's rule" and the eighteenth-century novel of moral action -- Tom Jones : the form in history -- "Big with jest" : the bastardy of Tristram Shandy -- The comparative anatomy of three "baggy monsters" : Bleak house, Vanity fair, Middlemarch -- Barchester towers : a fourth baggy monster -- Lord Jim and the formal development of the English novel -- Exodus and return : Joyce's Ulysses and the fiction of the actual -- The logic of Ulysses, or why Molly had to live in Gibraltar.