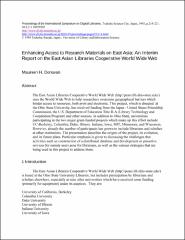 The East Asian Libraries Cooperative World Wide Web (http:/pears.lib.ahio-statc.edu/) uses the World Wide Web to help researchers overcome geographical barriers which hinder access to resources, both print and electronic. This project, which is directed at the Ohio State University, has received funding from the Japan - United States Friendship Commission, the U.S. Department of Education Title II-A (Library Technology and Cooperation Program) and other sources. In addition to Ohio State, universities participating in the two major grant-funded projects which make up this effort include: UC-Berkeley, Columbia, Duke, Illinois. Indiana, Iowa, MIT, Minnesota, and Wisconsin, However, already the number of participants has grown to include librarians and scholars at other institutions. The presentation describes the origins of the project, its evolution, and its future plans. Particular emphasis is given to discussing the challenges that activities such us construction of a distributed database and development or proactive services for remote users pose for librarians, as well us the various strategies that are being used in this project to address them.