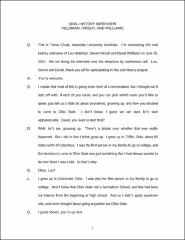 David Williams grew up in Tiffin, Ohio; the first member of his family to attend college, Ohio State was the only school he ever considered. Lou Heldman grew up in Cincinnati, and was also the first of his family to attend college. He chose Ohio State for its Journalism program. Steven Hirsch grew up in Pittsburgh, and chose Ohio State because of family connections, a scholarship and the fact that Columbus was still relatively close to home. They all met at Ohio State and were witness to the events leading up to, and culminating in, the student riots in May, 1970. Each describes his own experiences with the demonstrations, including interactions with the University administrators, student government representatives, police and National Guardsmen, and Ohio leaders.