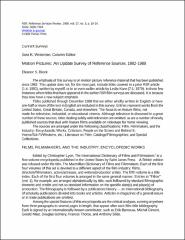 The emphasis of this survey is on motion picture reference material that has been published since 1982. This update does not, for the most part, include titles covered in a prior RSR article (1:4; 1983), written by myself, or in an even earlier article by Leslie Kane (7:1; 1979). In those few instances where titles that have appeared in the earlier RSR film surveys are discussed, it is because they now have a new subject emphasis