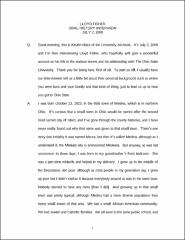 Lloyd Fisher was born on Oct. 23, 1923, in Medina, Ohio. In high school, Fisher was a cheerleader and a drum major with a good scholastic record. He was worried about affording college, though, until a good friend told him about the Stadium Scholarship Dormitories. Here, Fisher would work part-time and get a discount on tuition. Fisher came to the Ohio State University in 1941 and took up residence in the Stadium Dorms. He worked part-time mopping floors in the Ohio Union for 25 cents an hour. This work also helped him reduce all his expenses, like room and board, tuition, and fees, to around $350 for his first year. Like all of the Stadium Dorms residents, Fisher also shared the duties of working in the dining room, cleaning the bunk rooms, washing windows, and scrubbing down the shower rooms. Fisher even had to work during home football games. Fisher was active in extra-curricular activities, like the cheerleading squad and the Buckeye Art Players, where he was a member of the Buckettes, a five-member comedy group that performed skits. He also participated in intramural sports like softball and touch football. In December 1941, Fisher learned of the attack on Pearl Harbor during his first college finals. As classes continued through 1941 and 1942, Fisher saw more and more students leaving for active duty overseas. He was drafted into the Army in 1943 and went to Europe with the 97th Infantry Division in 1945. In 1946, Fisher returned from duty and joined the flood of students using the GI Bill to get through college. Because of this financial support, he did not return to the Stadium Dorms; instead, he first lived in veteran housing at Port Columbus, then in an off-campus apartment. In 1948, Lloyd Fisher obtained his bachelor’s degree and in 1949, he obtained his law degree. He first worked for the Ohio Department of Taxation, then Huntington Bank, then went into private practice. In recent years, he taught estate planning as part of an investment course for OSU employees sponsored by Ohio Public Employees Retirement System. He is a life-long member of the Alumni Association.