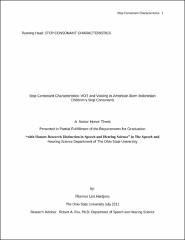 The increasing number of Indonesian immigrants in the United States suggests the need for deeper understanding of English acquisition as a second language by Indonesian children and their adult caregivers. Unfortunately this language's interaction with English as an L2 (particularly in terms of language interference) is currently understudied. This study examines the acquisition of English stop consonants by typically developing Indonesian bilingual children and their parents. Thirteen pairs of parent-child Indonesian bilingual speakers produced six stop consonants (/p/, /t/, /k/, /b/, /d/ and /g/) common in both languages in word-initial position with a variety of vowels. Pictures representing these words were shown on a computer monitor and speakers were asked to say the word in the context "That’s a ___" for English words and its equivalent "Itu ___" for Bahasa Indonesia words. The phonetic characteristics of voice onset time were the focus of this study. The prediction is that the children's production of English stops from both subject groups will have similar acoustical characteristics. However, their parents' production will have different acoustical characteristics because of the influence of the age of learning a second language. The findings of this study will enable us to learn more about first and second language acquisition among bilingual children.