The Power of the Press: Robert F. Wolfe and Billy Ireland Create a Civic Center for Columbus, Ohio 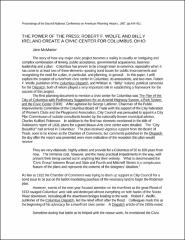 Jane McMaster, "The Power of the Press: Robert F. Wolfe and Billy Ireland Create a Civic Center for Columbus, Ohio," Proceedings of the Second National Conference on American Planning History (1987): 444-451.

The story of how any major civic project becomes a reality is usually an intriguing and complex combination of timing, public acceptance, governmental acquiesence, business leadership and a plan. Columbus has proven to be a tough town to convince, especially when it has come to at least two of these elements--passing bond issues for public improvements and recognizing the need for a plan, in particular, and planning, in general. In this paper, I will explore the creation of a riverfront civic center in Columbus, its antecedents, and two men, Robert F. Wolfe, publisher of the Columbus Dispatch, and William A. "Billy" Ireland, political cartoonist for the Dispatch, both of whom played a very important role in establishing a framework for the success of this project.