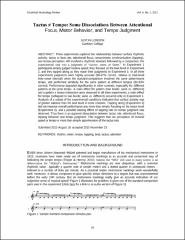 Three experiments explored the relationships between surface rhythmic activity, tactus or beat rate, attentional focus, sensorimotor synchronization (tapping), and tempo perception. All involved a rhythmic standard followed by a comparison; the experimental task was a judgment of “slower, same, or faster.” In Experiment 1 participants simply judged relative speed; they focused on the beat level in Experiment 2, and they tapped along as they made their judgments in Experiment 3. In all three experiments judgments were highly accurate (89-97% correct, relative to beat-level inter-onset interval) when the standard-comparison involved the same pattern/same tempo, and performed similarly for the same pattern at different tempos (80-83% correct). Performance degraded significantly in other contexts, especially for different patterns at the same tempo. A main effect for pattern (two levels: same vs. different) and a pattern x tempo interaction were observed in all three experiments; a main effect for tempo (collapsed to two levels: same vs. different) occurred only in Experiment 1. Analysis of a subset of the experimental conditions indicated that surface activity was of greater salience than the beat level in some contexts. Tapping along (Experiment 3) did not improve overall performance any more than simply focusing on the tactus level (Experiment 2), and a possible biasing effect of tapping rate on tempo judgment was observed. Thus there is an apparent dissociation between tactus rate, attentional focus, tapping behavior and tempo judgment. This suggests that our perception of musical speed or tempo is more than simple apprehension of the tactus rate.