Variety in Performance: A comparative Analysis of Recorded Performances of Bach's Sixth Suite for Solo Cello from 1961 to 1998 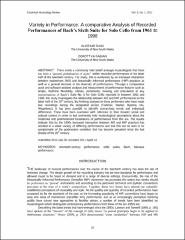 There exists a commonly held belief amongst musicologists that there has been a ―general globalisation of styles‖ within recorded performances of the latter half of the twentieth century. For many, this is evidenced by an increased interaction between mainstream (MS) and historically informed performance (HIP) practices as well as a general decrease in the diversity of performances. Through a comparative aural and software-assisted analysis and measurement of performance features such as tempo, rhythmic flexibility, vibrato, portamento, bowing, and articulation in key interpretations of Bach‘s Suite No. 6 for Solo Cello recorded in between 1961 and 1998, this study investigates the relationship between MS and HIP performances in the latter half of the 20th century. By limiting analyses to those performers who have made two recordings during the designated period (Tortelier, Starker, Bylsma, Ma, Wispelwey), it has been possible to identify overarching trends and individual differences. These have been examined with reference to their broader social and cultural context in order to test commonly held musicological assumptions about the modernist and postmodernist foundations of performances from this era. The results indicate that by the 1990s increased interaction between MS and HIP practices has resulted in a wider variety of differing performances and that this can be seen to be symptomatic of the postmodern condition that has become prevalent since the last decade of the 20th century.