Resolving the Challenge of E-Books 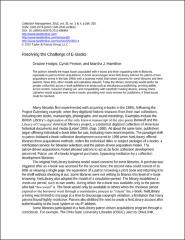 The authors identify the major issues associated with e-books and their expanding role in libraries, especially in patron-driven acquisitions. E-book access began when NetLibrary entered the patron-driven acquisitions arena in the late 1990s with a business model that raised concerns for some libraries and their patrons. Since then, other models and variations abound. Today the library community would prefer far greater uniformity across e-book publishers in areas such as simultaneous publishing, printing ability, access models, resource sharing use, and compatibility with handheld reading devices, among others. Libraries would acquire even more e-books, providing even more revenue for publishers, if these issues could be resolved.