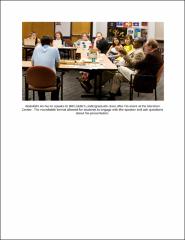 An-Na`im discussed how almost all the constitutions of Muslim majority countries stipulate that Islam is the religion of the state. Many constitutions also stipulate that Shari`a is the source of legislation. In his lecture, An-Na`im will argue that such provisions are not only incoherent, as the state is incapable of having a religion or enforce Shari`a as such, but also inconsistent with the principle of constitutionalism itself. He will also highlight some of the problematic consequences of this confusion in the constitutional, political and legal experiences of Muslim majority countries.