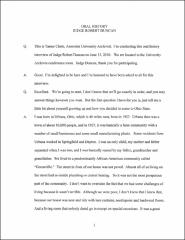 The Hon. Robert M. Duncan was born in 1927 in Urbana, Ohio. He came to OSU as a freshman in 1945, and he graduated from the College of Education in 1948. Unable to find a teaching job as an African American in Columbus, he went to Chicago, worked as a bell boy, and decided to go to law school. He returned to Ohio State, and worked at the statehouse through graduate school. Duncan’s military obligations had been deferred during the Korean War, to allow him to finish law school, so in 1952 he was sent to Alaska to handle legal matters for the army. In 1954 Duncan returned to Columbus. He was soon hired as Assistant Attorney General, and was eventually appointed Chief Counsel. Duncan was later appointed to the Franklin County Municipal Court, the U.S. Court of Military Appeals in Washington, D.C., and the U.S. District Court for the Southern District of Ohio. He joined a law firm, started teaching at OSU, and was eventually hired to the OSU Department of Legal Affairs. He served as Secretary of the Board of Trustees, and has seen—and helped to make—many of the changes within the University and the state’s education and legal system.