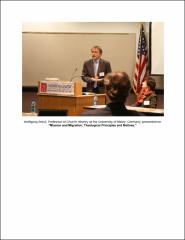 Migration and religion have shaped in particular the United States but also the German-speaking territories of Central Europe during the religious wars in the wake of the Reformation; immigration (especially from Islamic countries) has taken again an important role in present political debate in Germany (and in the EU). A first group of lectures at the conference will present and discuss recent research on the historical phase of early German transatlantic migrations and colonization by Pietists and Moravians in North America, especially Pennsylvania and Ohio from a post-colonial vantage point. The sessions of the second conference day will then address individual and group migrations from Turkey and Islamic countries in the 20th and 21st centuries and the political and religious controversies and cultural clashes as well as efforts at resolution in Germany. The Migration, Religion and Germany conference will provide a stimulating intellectual environment for discussing important cultural issues concerning Central Europe, especially the German-speaking countries, and should also contribute to our understanding of the importance of the present migration / immigration debate in the United States. Keynote Address: Rebekka Habermas, University of Göttingen