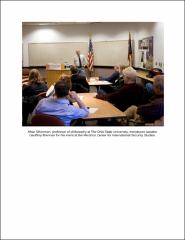 Brennan's discussion was based off of a paper that is a response to a line of argument developed in a 1999 paper by Al Goldman and endorsed with minor modifications in Richard Tuck's book Free-Riding (Harvard University Press, 2008). The argument seeks to extend the scope of voter responsibility by appeal to a broadened account of causal efficacy. Goldman sees this argument as supplying moral reasons why individuals should vote and also as explaining why so many of them do vote. Brennan argued that in the voting case responsibility and causal efficacy should be maintained as independent notions, that Goldman's line yields the wrong advice for action-guidingness, and that the explanatory argument appeals to dubious logic.