Causes and Origins of the Collapse of the Former Soviet Union 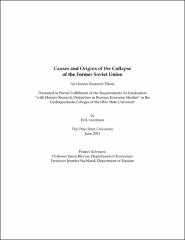 Scholars today continue to debate over specifically how the Former Soviet Union collapsed in late 1991. Unfortunately they must depend on poor Soviet data that is largely unreliable and faulty. Much of it is ambiguous and therefore cannot be trusted with great significance. This is a theoretical analysis and empirical study. I postulate that the weak socialist fundamentals that supported the Soviet Union led it its imminent collapse. The Soviet Union economic model promoted excess centralization, vast amounts of inefficiencies and faulty priorities. External factors and economic shocks also prevented the Soviet Union from allocating their resources to their best uses. The Cold War, the largest external shock to the Soviet economy, resulted in large defense spending, which caused this internal economic collapse. I attempt to determine to what extent the Cold War impacted the economy in the long run and conclude that socialist theories fail to respond to such shocks. The Soviet Union deviated from these socialist principles, and I show this by examining Soviet behavior, including the theory of cognitive dissonance and how they ignored long-term problems (blat), which only exasperated the challenges Gorbachev faced. I draw appropriate conclusions of Gorbachev’s economic reforms, in that they were inconsistent with economic models of Leninist-Marxist theories.