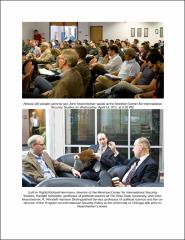 Mearsheimer discussed how when the Cold War ended in 1989, there was much optimism about the future of international politics, and especially America's ability to lead the world toward the millennium. Two decades later, pessimism has replaced optimism, as the United States finds itself in losing wars in Afghanistan and Iraq, and unable to get Israel, Iran and North Korea to change their behavior on matters of critical importance to Washington. Mearsheimer will attempt to explain what went wrong and what can be done to fix the problems plaguing U.S. foreign policy.