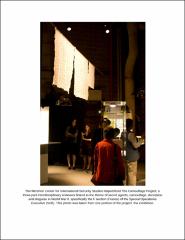 The Camouflage Project, May 19-21, 2011, The Ohio State University. Overview: The goal of The Camouflage Project is to create, organize and execute a three-part interdisciplinary endeavor linked to the theme of secret agents, camouflage, deception and disguise in World War II, specifically the F section (France) of the Special Operations Executive (SOE). The three parts are as follows: Performance: To devise a new performance work as collaboration between Ohio State University Theatre and the Advanced Computing Center for the Arts and Design (ACCAD). This will be a multimedia work combining digital animations and video projections with experimental use of 3D printing, 3D scanning and projection mapping. Exhibition: To create a visual environment parallel to the performance space, that will have a second life as an exhibition. The exhibit features historical background (interviews and soldier training films) on the science and art of camouflage in both World Wars organized around a visual study of selected SOE (principally female) agents and espionage circuits in France, examples of military equipment, devices, disguises, gadgets and weapons of deception. Symposium: To organize and host an international symposium on the multiple artistic and instrumental meanings of camouflage, to be held in May 2011. The symposium features panels of Ohio State and international experts from military history, political science, and the Imperial War Museum addressing the subject of camouflage and the SOE. The camouflage project offers a fresh meaning to the expression "theatre of war." On one level it theatricalizes the history of military camouflage, particularly the Special Operations Executive (SOE) and the role played by women agents in its espionage activity. On another it reveals the artistic dimensions of these activities: a variety of theatre artists — scenic, costume, make-up designers, and vaudeville magicians — were employed to use their theatrical skills to deceive and fool the enemy. In 1942 a group of New York scene designers created The Camouflage Society of Professional Stage Designers, hiring two specialists to teach them the art and science of camouflage. Rather than tales of derring-do and spying, this project seeks to look at different and often hidden aspects of the war: the use and creation of camouflage, both literally and metaphorically, by people who had to work secretly behind enemy lines. The performance storyline will highlight the work of women agents, many of whose accomplishments have been concealed, erased or obscured for a variety of reasons. A narrative strategy will be to include elements of the training process involved in preparing agents for the field and the often-disastrous consequences of strategic decisions made by the SOE leadership. Keynote Address: Juliette Pattinson, University of Strathclyde