The Role of Chromium in the Hot Corrosion of Metals 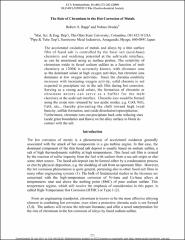 The accelerated oxidation of metals and alloys by a thin surface film of fused salt is controlled by the local salt (acid-base) chemistry and oxidizing potential at the salt/scale interface, as can be monitored using ec surface probes. The solubility of chromium oxide in fused sodium sulfate as a function of melt chemistry at 1200K is accurately known, with chromate ions as the dominant solute at high oxygen activities, but chromite ions dominate at low oxygen activities. Since the chromia solubility increases with increasing oxygen activity, solid chromia is not expected to precipitate out in the salt film during hot corrosion. Serving as a strong acid solute, the formation of chromite or chromate anions can serve as a buffer for the melt chemistry at the scale/salt interface. Chromite ions would be formed using the oxide ions released by less acidic oxides, e.g. CoO, NiO, FeO, etc., thereby preventing the shift toward high local basicity, sulfide formation, and oxide dissolution/reprecipitation. Furthermore, chromate ions can precipitate back onto reducing sites (scale grain boundaries and flaws) on the alloy surface to block its contact with the salt.