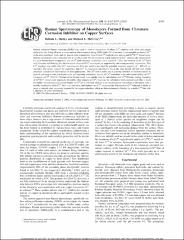 Surface enhanced Raman scattering (SERS) was used to observe interactions of dilute Cr^VI solutions with silver and copper surfaces in situ. Using silver as a model surface which supports strong SERS with a 514.5 nm laser, it was possible to observe Cr^III at the near monolayer level, and the spectra were compared to those from Cr^III oxyhydroxide species and Cr^III/Cr^VI mixed oxide. Similar experiments were conducted with Cu surfaces and 785 nm excitation. Upon exposure to Cr^VI solution, the characteristic Cu oxide Raman bands disappeared, and a Cr^III band increased in intensity over a period of ~20 h. The intensity of the Cr^III band on Cu became self-limiting after the formation of several Cr^III monolayers, as supported by chronoamperometry experiments. This Cr^III spectrum was stable after Cr^VI was removed from the solution provided the potential remained negative of –200 mV vs. Ag/AgCl. The results support the conclusion that Cr^VI is reductively adsorbed to Cu at the near neutral pH and open circuit potentials expected for Cu/Al alloys in field applications. The Cr^III film is stable and is a strong inhibitor of electron transfer in general and oxygen reduction in particular. An important mechanistic feature of Cr^III formation is the substitution lability of Cr^VI compared to Cr^III. The Cr^VI-O bond can be broken much more rapidly than the substitution inert Cr^III-O bond, making formation of Cr^III/Cr^VI mixed oxide kinetically favorable. Once reduced to Cr^III, however, the substitution inert oxyhydroxide film is much less labile. An important and central feature of Cr^VI as a corrosion inhibitor is its transformation via reductive adsorption from a mobile, substitution labile Cr^VI form to an insoluble, substitution inert Cr^III oxyhydroxide. Furthermore, Cr^VI reduction is likely to occur at cathodic sites previously responsible for oxygen reduction, which are then permanently blocked by a stable Cr^III film with a thickness of a few monolayers.