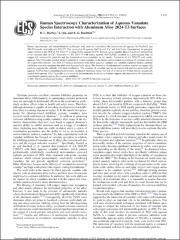 Raman spectroscopy and electrochemical techniques were used to characterize the interactions of aqueous NaVO_3/NaCl and NH_4VO_3/oxalic acid with AA 2024-T3. The interaction of aqueous NaVO_3 with Cu^0 and Cu_2O was characterized. At potential values similar to the OCP of AA 2024-T3 in dilute NaCl, aqueous NaVO_3 formed a polyvanadate film on Cu_2O and formed little or no vanadate film on Cu^0. Treatment of AA 2024-T3 with basic, aqueous NaVO_3/NaCl resulted in a polyvanadate film on copper-rich intermetallic particles and the formation of monovanadates on the matrix. Treatment of AA 2024-T3 with acidic, aqueous NH_4VO_3/oxalic resulted in the formation of monovanadates on the matrix and provided no evidence of vanadate species on copper-rich particles. AA 2024-T3 samples pretreated with either aqueous vanadate salt solution displayed modest cathodic inhibition soon after treatment but inhibition degraded with aging. The formation of polymerized vanadates species on copper-rich particles supports the cathodic inhibition mechanism. The presence of vanadate species on copper-rich particles pretreated with aqueous NaVO_3/NaCl containing predominantly tetrahedral vanadates versus the lack of evidence for similar species on particles treated with aqueous NH_4VO_3/oxalic acid containing predominantly octahedral vanadates supports the importance of tetrahedrally coordinated vanadate species for corrosion inhibition.