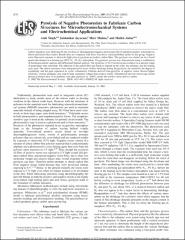 Carbon structures were fabricated by the pyrolysis of photopatterned negative photoresists (SU-8 and photosensitive polyimide) on silicon and fused silica wafers. Results here are compared with those of positive resists published earlier by this group. Negative resist films need exposure to ultraviolet light prior to pyrolysis to produce carbon films. The pyrolysis was carried out in a closed quartz tube furnace in a forming gas (95% N_2, 5% H_2) atmosphere. The pyrolysis process was characterized using a combination of thermogravimetric analysis and differential thermal analysis. The pyrolysis of SU-8 involved gas evolution in a narower range of temperature than polyimide. The adhesion of the carbon film was found to depend on the resist, the substrate, and the heating cycle used. The carbon structures were characterized in terms of their shrinkage during the pyrolysis, the resistivity, the degree of crystallinity and the peak separation in cyclic voltammetry. Carbons derived from pyrolysis of negative resists showed higher resistivity, vertical shrinkage, and peak-to-peak separation voltage than positive resists. Transmission electron microscope results showed a distinct lack of crystallinity even after pyrolysis at 1100°C, unlike the positive resist derived carbon.