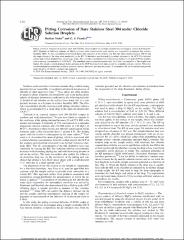 Pitting corrosion behavior of stainless steel 304 (SS304) under droplets of chloride solution was investigated using a Kelvin probe (KP). Droplets of different volumes of MgCl_2 solution were placed on the steel surface and exposed to a constant low relative humidity (RH). As the concentration increased during the exposure of the drop to low RH, the open-circuit potential (OCP) and the shape change of the drop were monitored by the KP. Pit initiation was detected by a sudden decrease in the OCP. Pits initiated earlier under small droplets than under large drops. The chloride concentration at initiation was between 3.0 and 8.4 M for droplets with a starting concentration of 0.88 M Cl^−. The initiation concentration increased when the initial concentration of the droplet was higher. The anodic current demand of pits growing at the OCP decreased with time as did the available cathodic current. When the current demand exceeded the available cathodic current, the active pit area decreased. A mechanism for pit formation and growth under droplets of MgCl_2 solution was proposed.