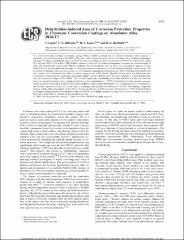 It is well known that chromate conversion coatings (CCCs) exhibit a prompt loss in corrosion resistance when exposed to moderately elevated temperatures (60-100°C). They also suffer a gradual loss in corrosion resistance due to ambient temperature exposure. To better understand the origins of losses in corrosion resistance, CCCs were formed on 99.99% Al, 1100 Al [Al-1.0(Fe, Si, Cu)], and 2024-T3 (Al-4.4Cu-1.5Mg-0.6Mn), exposed to elevated and ambient temperature exposures for various lengths of time, and characterized using several different methods. The Cr(VI):total Cr ratio in CCCs was estimated by analysis of data derived from X-ray absorption spectroscopy. Corrosion resistance was measured by electrochemical impedance spectroscopy. The evolution of shrinkage cracking was examined by environmental scanning electron microscopy. Cr(VI) leaching experiments were also carried out to characterize the effect of thermal exposure on Cr(VI) release. Thermal analysis and X-ray diffraction were conducted to characterize the temperature-dependent changes in CCCs. Results show that CCCs degrade in several distinct steps over the temperature range of 20 to 500°C. Our findings support the longstanding notion that dehydration is the root cause for losses in corrosion resistance due to aging at ambient and low temperatures (<150°C). Extended X-ray fine structure measurements indicate a shortening in Cr(III)-Cr(III) nearest neighbor distances upon dehydration. This is interpreted as a consolidation in the Cr(OH)_3 backbone of the CCC which leads to shrinkage cracking and immobilization of Cr(VI). This finding is important because it links older observations of the effects of aging and heating on CCCs to newer interpretations of CCC formation based on inorganic polymerization. Overall, these results reveal CCCs to be highly dynamic coatings with corrosion resistance properties that vary considerably in both the short term and long term.