Structural Analysis and Photocurrent Spectroscopy of CCCs on 99.99% Aluminum 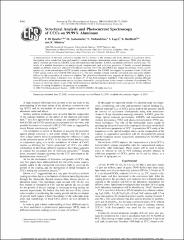 A characterization of chromate conversion coatings (CCCs) formed in the presence and in the absence of accelerator (ferro-ferricyanide redox couple) has been performed by various techniques (transmission electron microscopy, TEM, glow discharge optical emission spectrometry, GDOES, X-ray absorption near-end structure, XANES, and photon correlation spectroscopy). The results of a detailed investigation on morphological, compositional, and solid-state properties of freshly converted aluminum samples at different immersion times (30 s-90 min) are reported. The TEM and GDOES data suggest the presence of iron-cyanide species only in the external layer of CCC of nearly constant thickness. The XANES data suggest the presence of both Cr(VI) and Cr(III) species with a ratio Cr(VI)/Cr(III) close to 1:2. This ratio remains constant with the conversion time and seems slightly affected by the composition of conversion solution. The photoelectrochemical study suggests an insulating or slightly p-type behavior for CCC layers. A bandgap value of about 2.55 eV has been estimated, regardless of the conversion solution, although some differences in the photocurrent spectra have been observed for coatings formed in the presence or absence of accelerator. The location of electronic energy levels of the Al/CCC/electrolyte interface has been derived which could account for the different kinetics of coating formation in the presence of accelerator.