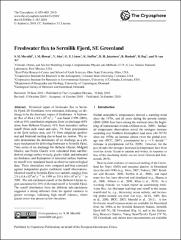 Copernicus Publications on behalf of the European Geosciences Union

Terrestrial inputs of freshwater flux to Sermilik Fjord, SE Greenland, were estimated, indicating ice discharge to be the dominant source of freshwater. A freshwater flux of 40.4 ± 4.9×10^9 m^3 y^−1 was found (1999–2008), with an 85% contribution originated from ice discharge (65% alone from Helheim Glacier), 11% from terrestrial surface runoff (from melt water and rain), 3% from precipitation at the fjord surface area, and 1% from subglacial geothermal and frictional melting due to basal ice motion. The results demonstrate the dominance of ice discharge as a primary mechanism for delivering freshwater to Sermilik Fjord. Time series of ice discharge for Helheim Glacier, Midgård Glacier, and Fenris Glacier were calculated from satellite-derived average surface velocity, glacier width, and estimated ice thickness, and fluctuations in terrestrial surface freshwater runoff were simulated based on observed meteorological data. These simulations were compared and bias corrected against independent glacier catchment runoff observations. Modeled runoff to Sermilik Fjord was variable, ranging from 2.9 ± 0.4×10^9 m^3 y^−1 in 1999 to 5.9 ± 0.9×10^9 m^3 y^−1 in 2005. The sub-catchment runoff of the Helheim Glacier region accounted for 25% of the total runoff to Sermilik Fjord. The runoff distribution from the different sub-catchments suggested a strong influence from the spatial variation in glacier coverage, indicating high runoff volumes, where glacier cover was present at low elevations.