Revisiting the hearing screening protocol: Should 6000Hz be included? 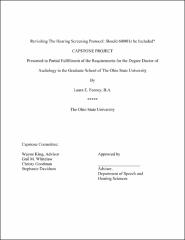 School hearing screenings are performed to identify children at risk for hearing loss. Current protocols in the state of Ohio include pure tone screening at 1000, 2000, and 4000Hz with tympanometry being an optional screening test. Although this screening does identify children at risk for hearing loss, there is a possibility that children with high frequency hearing loss may not be identified. In this study, 400 students in fifth and ninth grades were screened using pure tone audiometry at 1000, 2000, 4000, 6000Hz, and tympanometry. Without knowing whether or not the students who referred on the initial screening in fact had hearing loss, it cannot be concluded whether or not 6000Hz should be included in the screening protocol. However, preliminary data was collected from this screening, which revealed that there was no significant difference between gender or grade level in the screening. The initial data confirms an increased number of students who do not pass the experimental screening protocol including 6000Hz than the standard protocol. This is an extremely high referral rate, and would presumably include many false positives, higher than the referral rate expected from a screening with the established prevalence of known hearing loss.