New START Treaty and Beyond 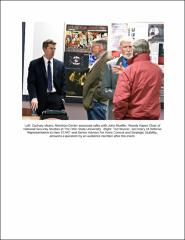 Each year the Mershon Center for International Security Studies selects one lecture in honor of Joseph J. Kruzel, an Ohio State faculty member in Political Science who served in the U.S. Air Force as well as other posts in the federal government. Kruzel was killed in Sarajevo, Bosnia, in 1995 while serving as Deputy Assistant Secretary of Defense for European and NATO Affairs. Edward (Ted) Warner III discussed the buildup of nuclear arms between the United States and Russia during the Cold War. Since then, we have been working together to decrease our nuclear arms together. He explains how once the treaty takes effect, we each perform weapons inspection​s on each other's supplies which is a key part of the treaty. In the NEW Start Treaty, there was a lot of negotiatio​n of how these inspection​s would be handled between the two countries.