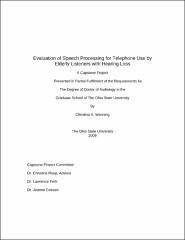 Communicating over the telephone is a daily struggle for many older adults with hearing loss. Hearing aids and assistive listening devices improve the situation, but the vast majority of hearing-impaired elderly do not own such devices. In response to this problem, a Telephone Speech Enhancement Algorithm (TSEA) was designed through a collaborative effort of The Ohio State University Department of Speech and Hearing Science and the Department of Electrical and Computer Engineering. The TSEA uses an algorithm that pre-processes speech, such that the signal is enhanced on the talker’s end before being sent across the telephone line to the listener with hearing loss. Previous research examined the effectiveness of the TSEA at improving speech intelligibility for three levels of speech perception (phoneme, word, and sentence) (Poling, 2004; Harhager, 2007), but ceiling effects in recognition were noted, possibly biasing the results. Twelve older adults with a mild to severe sensorineural hearing loss consistent with presbycusis participated in this study. The objective of this study was to equate the level of difficulty of the three speech perception tests used to measure speech intelligibility first, before measuring the effectiveness of the TSEA at improving speech intelligibility over the telephone. Specifically, the MRT (phoneme-based test), the SPIN (word-based test), and the QSIN (sentence-based test) were presented in two conditions: unprocessed and processed using Comunify, the platform that runs the TSEA. Multitalker babble was added to the MRT and SPIN in both the unprocessed and processed conditions in an attempt to equate the level of difficulty of the three speech intelligibility tests. Results revealed that significant improvements in speech perception over the telephone occurred in the processed condition. MRT performance increased from 68.2% to 79.0%, SPIN performance increased from 55.2% to 79.8%, and QSIN performance improved from 49.9% to 75.0%. However, significant differences in the amount of improvement among the three tests were still noted. Specifically, the improvement due to processing for the SPIN (24.6%) and QSIN (25.1%) were significantly greater than for the MRT (10.8%). The results of this study verify that pre-processing the telephone signal is successful at improving speech understanding over the telephone for older adults with hearing loss. In addition, equal levels of improvement in the processed condition were noted for both the SPIN and QSIN, but less improvement was noted for the MRT. Less improvement on the MRT is likely the result of the high performance exhibited in the unprocessed condition and illustrates that while the SPIN successfully equated for difficulty, ceiling effects may still be present for the MRT.