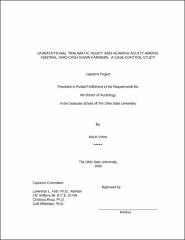 Farming has been identified since the late 1930s as one of the most hazardous occupations in the world, but in general has the least regulation and laws to protect agricultural workers. Several studies have found a higher prevalence of hearing loss among farmers as compared to their non-farming peers. The purpose of this case-control study was to examine the relationship between unintentional injury and hearing threshold levels (HTLs) among male principal operators (PO) living and working on central Ohio cash-grain farms using data from the Ohio Farm Family Health Survey (OFFHS). Five hundred ten male POs participated in Phase 2 of this study where hearing threshold levels were used to assess the risk between HTLs and injury risk. The most noteworthy result was that thresholds poorer than 25 dB for 6000 Hz in the left ear resulted in an OR of 3.35 (p=0.01, 95% CI=1.29-8.73) increased risk for injury compared to those subjects with thresholds 25 dB or better for 6000 Hz in the left ear after controlling for several potential confounders using multivariable logistic regression. Other significant findings for injury risk for those with >25 dB HTLs were the right, left, and binaural threshold at 6000 Hz, left high-frequency pure tone average, and binaural 500 Hz and 1000 Hz. Based on the p-value and 95% CI, four final ORs were found to be statistically significant (Lt 500, Lt 1000, Lt 6000, Bi 1000). Hearing conservation programs as well as audiometric testing at 6000 Hz for this population will help to reduce the incidence of hearing loss, therefore, likely reducing injury risk among agricultural populations.