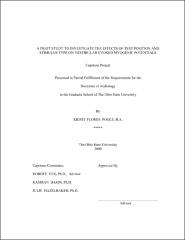 Vestibular evoked myogenic potentials (VEMPs) are a non-invasive test of otolith function and a portion of the descending vestibulo-spinal system. Three subjects with normal function of the vestibular system underwent VEMP testing with 500 Hz tone bursts and click stimuli. Response characteristics were observed in both the sitting and supine test positions. The success rate of each stimulus in VEMP studies, the mean P1 and N1 latencies for both stimuli, the P1-N1 amplitude, the amplitude symmetry, and the relationship between muscle activation and P1-N1 amplitude were explored in each individual. The 500 Hz tone burst stimuli were more successful at evoking the desired response. Subjects generated more muscle activity as measured by EMG in the supine position than in the sitting position. Due to the small sample size, a clear relationship between muscle activation and amplitude did not emerge.