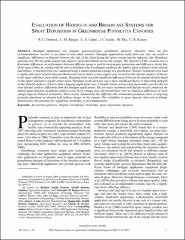 R. C. Derksen et al, "Evaluation of Handgun and Broadcast Systems for Spray Deposition in Greenhouse Poinsettia Canopies," Transactions of the ASABE 53, no. 1 (2010)

Handgun applicators are popular, general‐purpose greenhouse sprayers. However, there are few recommendations on how to use them to treat plant benches. Handgun applications made from one side can result in significant differences in deposits between the side of the plant facing the spray stream and the opposite side. Broadcast spraying over the top of the canopy may improve spray distribution across the canopy. The objective of this research was to determine differences in performance between different sprayers used to treat mature poinsettias and differences in the fate of the spray within the canopy with the aim to determine which techniques produced the highest spray retention on the abaxial leaf surface. A benchtop trial was conducted using a mature poinsettia canopy in a greenhouse. Sprayer treatments were used to apply tank mixes of pesticides and fluorescent tracer. Nylon screen targets were secured to the abaxial surfaces of leaves in the upper and lower parts of the canopy. Benchtop trials revealed significant differences between the amount of spray found on the upper and lower canopy target areas. Handgun nozzle pressure was a more significant factor in depositing material on the abaxial surfaces of leaves than changing application rate. A TwinJet boom system using dual‐orifice nozzles did not treat abaxial surfaces differently from the handgun applications. The air‐assist treatment with flat‐fan nozzles produced the highest mean deposits on abaxial surfaces in the lower canopy area, but overall there were no statistical differences in lower canopy deposits between treatments. These results demonstrate the difficulty that ornamental producers have in targeting pesticide placement on abaxial leaf surfaces deeper in the canopy. The variability in spray deposits observed on foliage demonstrates the potential for significant variability in pest management.