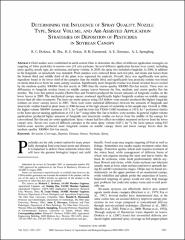 Field studies were established in north central Ohio to determine the effect of different application strategies on targeting of foliar pesticides in narrow-row (18 cm) soybeans. Several different application factors were tested, including spray quality, nozzle type, air-assistance, and spray volume. In 2005, the spray mix included a fungicide. In 2006, in addition to the fungicide, an insecticide was included. Plant samples were removed from each test plot, and stems and leaves from the bottom third and middle third of the plant were separated for analysis. Overall, there was significantly less active ingredient found in the lower third of the canopies than the middle third, and significantly less pesticide residue was found on stems than leaves from the same canopy location. Significantly more fungicide residue was found on lower leaves treated by the medium-quality XR8004 flat-fan nozzle in 2005 than the coarse-quality XR8005 flat-fan nozzle. There were no differences in fungicide residue found on middle canopy leaves between the fine, medium, and coarse quality flat-fan nozzles. The twin-fan pattern nozzles (Turbo Duo and TwinJet) produced the lowest amounts Of fungicide residue on the lower leaves in 2005. The mechanical canopy opener produced significantly higher fungicide residues on middle canopy leaves than all other treatments. The Jacto air-assist sprayer using JA3 hollow-cone nozzles produced the highest fungicide residues on lower canopy leaves in 2005. There were some statistical differences between the amounts of fungicide and insecticide residue found oil plant tissue in 2006 because of the high amount of variability in the sample data. Overall in 2006, the higher volume XR8004 treatment (187 L ha(-1)) and the twin-fan TTJ60-11003 treatment at 145 L ha(-1) performed similar to the Jacto sprayer making applications at 145 L ha(-1) using either flat-fan or hollow-cone nozzles. In general, higher volume applications produced higher amounts of fungicide and insecticide residue on leaves from the middle of the canopy for conventional flat-fan and air-assist applications. Spray volume had less affect on residues measured on leaves from the lower canopy area. Across two years of different canopies at the same spray volume (145 L ha(-1)), the Jacto sprayer using JA3 hollow-cone nozzles produced more fungicide residue on middle canopy stems and lower canopy leaves than the medium-quality XR8004 flat-fan nozzle.