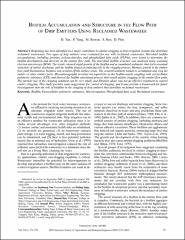 D. Yan et al, "Biofilm accumulation and structure in the flow path of drip emitters using reclaimed wastewater," Transactions of the ASABE 53, no. 3 (2010)

Biofouling has been identified as a major contributor to emitter clogging in drip irrigation systems that distribute reclaimed wastewater. Two types of drip emitters were evaluated for use with reclaimed wastewater. Microbial biofilm accumulations, including proteins, polysaccharides, and phospholipid fatty acids (PLFAs), were tested to determine the biofilm development and diversity in the emitter flow path. The nzicrobial biofilm structure was analyzed using scanning electron microscopy (SEM). The results showed rapid growth of the biofilm and accumulated sediments that led to eventual reduction of emitter discharge, and the biofilm played an inducing role in the clogging process. Biomass growth in the emitter flow path fluctuated as biomass was scoured off the surface areas. The scoured sediment tended to accumulate and clog the outlets or other emitter parts. Microphotographs revealed microparticles in the biofilm matrix coupling with extracellular polymeric substance (EPS) and showed the biofilm attachment process that would initiate clogging in the emitter flow path. The particle size of the clogging sediment can be very small, and filtration alone was not an effective treatment to control emitter clogging. This study provides some suggestions for control of clogging, and it may provide a framework for future investigations into the role of biofilms in the clogging of drip emitters that distribute reclaimed wastewater.