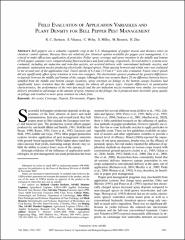 Bell peppers are a valuable vegetable crop in the U.S. Management of pepper insects and diseases relies on chemical control options. Because there are relatively few chemical options available for pepper pest management, it is critical to make efficacious application of pesticides. Foliar spray coverage and spray retention in the middle and bottom of bell pepper canopies were compared using fluorescent dyes and food coloring, respectively. Several delivery systems were evaluated, including air-induction and twin-fan nozzles, air-assisted delivery with conventional hydraulic nozzles, and pneumatic atomization nozzles producing electrically charged sprays. Plant spacing between and within rows was evaluated in the second year of the application trial. Travel speeds of 6.4 and 12.9 km h^-1 were also evaluated. Faster travel speeds did not significantly affect spray retention in twin-row canopies. The electrostatic sprayer produced the greatest differences in deposits between the middle and bottom of the canopy. Although there was no more than a 25 cm difference between leaves sampled from the middle and bottom canopy locations, spray retention on foliage in the bottom canopy locations had significantly lower retention than the middle canopy for almost all sprayer types. Despite differences in atomization characteristics, the performance of the twin-fan nozzle and the air-induction nozzle treatments were similar. Air-assisted delivery provided no advantage in the amount of spray retained on the foliage, but it produced more desirable spray quality on foliage and resulted in more spray retained on whole fruit.