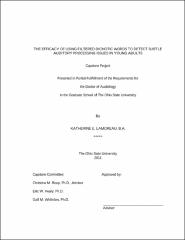 The aim of the present study was to determine whether the use of a dichotic speech recognition task was sensitive to the auditory processing complaints of young adults. Subjects were 24 normal-hearing young adults, aged 19 to 38 years (mean = 23.5 years). Ten subjects with no auditory processing complaints and normal scores on the SCAN-3:A (Keith, 2009) comprised the normal control group. The remaining 14 subjects presented with auditory processing complaints and had normal to borderline performance on the SCAN-3:A, placing them in the probable APD group. Dichotic word recognition performance was examined across three response conditions: free recall, directed right, and directed left, in both an unfiltered and filtered condition. The results of this study revealed no significant difference between these groups in terms of performance on the filtered dichotic word recognition task. However, when subjects in the probable APD group were divided into two different groups (APD I and APD II) according to their SCAN-3:A scores, a significant difference in performance was found between the normal control and the APD II group. These results suggest that the SCAN-3:A normative data for young adults may be inappropriate for classifying patients in this population as normal or disordered. The lack of significant difference in performance between the probable APD group and the normal control group is likely due to the large amount of variability in performance among subjects in the former group.