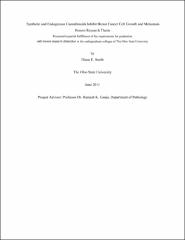 Research funded by Undergraduate Research Office, College of Pharmacy Department of Pathology, and College of Arts and Sciences