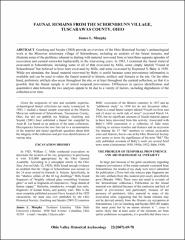 Goerhing and Snyder (2003) provide an overview of the Ohio Historical Society’s archaeological work at the Moravian missionary village of Schoenbrunn, including an analysis of the faunal remains by graduate student Anne B. Lee, and illustrate some of the problems inherent in dealing with material recovered from at least three separate episodes of excavation and curated somewhat haphazardly in the intervening years. In 1983, I examined the faunal material excavated at Schoenbrunn, including some or all of that excavated by Mills, some simply labeled "Found at Schoenbrunn" but believed to have been excavated by Mills, and some excavated by Raymond S. Baby in 1950. While not abundant, the faunal material recovered by Baby is useful because some provenience information is available and can be used to relate the faunal material to historic artifacts and features at the site. On the other hand, prehistoric artifacts also occur throughout the site, or at least throughout the curated collection, so that it is possible that the faunal sample is of mixed temporal provenience. Differences in species identification and quantitative data between the two analyses (Murphy 1983 and Lee in Goehring and Snyder 2003) appear to be due to a variety of factors, including degradation of the collection over time as well as misidentifications of both individual elements and taxa.