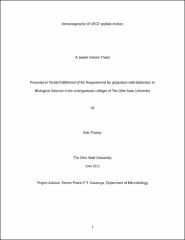 VEGF (vascular endothelial growth factor) is a growth factor responsible for angiogenesis, which is the development of new blood vessels from preexisting ones. Oxygen and nutrients are supplied to tumors by blood vessels and tumor growth is greatly limited without angiogenic capabilities. Targeting VEGF is a promising strategy for cancer treatment and preventing metastasis. The focus of this project is to inhibit VEGF-VEGFR-2 (VEGF receptor 2) interaction high affinity by producing anti-peptide antibodies that will compete with VEGF for the binding region of VEGFR-2. VEGFR-2 has been shown to bind VEGF and stimulate angiogenesis, thereby resulting in increased tumor growth and metastasis. The hypothesis to be tested is whether these anti-peptide antibodies are able to recognize VEGFR-2 by specifically binding to the protein. The peptides were synthesized by solid phase peptide synthesis and binding was tested against antibodies produced in outbred rabbits that had been immunized with the peptide vaccine. Antibodies to the natural sequence (VEGF 102-122), its cyclic sequence (VEGF P3), and its retro-inverso sequence (VEGF P4) were tested against the peptides in both simple and competitive ELISA. In the case of immunization, the VEGF B-cell epitopes were co-linearly synthesized with the promiscuous T-helper epitope MVF, which is the measles virus fusion protein. The B-cell and T-cell epitopes were linked by a flexible four-residue turn (GPSL) linker which allows for each epitope to fold independently. Linked with the B-cell epitopes were MVF-VEGF 102-122, MVF-VEGF P3, and MVF-VEGF P4. The synthesized peptide vaccines were immunogenic and elicited antibody production by the immune system, which successfully bind and recognize the peptide and the natural VEGF protein. The antibodies should be able to prevent growth of tumors dependent on VEGF and angiogenesis. Results from the competitive ELISA showed that VEGF peptide mimics were able to prevent the antibodies from binding the VEGF protein. These highly specific anti-peptide antibodies should have therapeutic potential in most cancers that are dependent on angiogenesis.