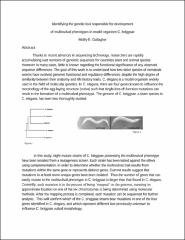 Thanks to recent advances in sequencing technology, researchers are rapidly accumulating vast numbers of genomic sequences for countless plant and animal species. However in many cases, little is known regarding the functional significance of any observed sequence differences. The goal of this work is to understand how two sister species of nematode worms have evolved genomic functional and regulatory differences, despite the high degree of similarity between their anatomy and life history traits. C. elegans is a model organism widely used in the field of molecular genetics. In C. elegans, there are four genes known to influence the morphology of the egg-laying structure (vulva) such that single loss-of-function mutations can result in the formation of a multivulval phenotype. The genome of C. briggsae, a sister species to C. elegans, has been less thoroughly studied.In this study, eight mutant strains of C. briggsae possessing the multivulval phenotype have been isolated from a mutagenesis screen. Each strain has been tested against the others using complementation, in order to determine whether the multivulval trait results from mutations within the same gene or represents distinct genes. Current results suggest that mutations in at least seven unique genes have been isolated. Thus the number of genes that can easily mutate to the multivulval phenotype in C. briggsae is larger than that found in C. elegans. Currently, each mutation is in the process of being ‘mapped’ on the genome, meaning its approximate location on one of the six chromosomes is being determined using molecular methods. After the mapping process is completed, each mutation can be sequenced for further analysis. This will confirm which of the C. briggsae strains bear mutations in one of the four genes identified in C. elegans, and which represent different loci previously unknown to influence C. briggsae vulval morphology.