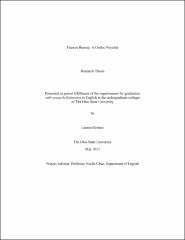 Gothic novels by British women writers such as Ann Radcliffe and the Brontё sisters have been the subject of several decades of research. This project focuses on Frances Burney, an influential woman writer of the late eighteenth-century, and aims to present her as a Gothic novelist. Burney is known for her satirical narrative style. However, one finds that Burney is not always satirical; instead, there are violent and passionate scenes in her narration that are more characteristic of Gothic prose than satire. Upon close inspection of Frances Burney’s novels Evelina and Cecilia, one finds many Gothic scenes and descriptions, with abnormal occurrences and strange happenings. Thus, my research project will make an argument for approaching these texts as Gothic novels. The process used to provide evidence for this argument has included research on the Gothic and Frances Burney. Critical works consulted include are The Cambridge Companion to Gothic Fiction, which has helped me to create a working definition of the women’s Gothic novel, and Anne William’s Art of Darkness, which has helped me to better understand the Gothic novel and the prose of that time. In my thesis, I provide an overview of the characteristics associated with Gothic fiction. Then I offer readings of Evelina and Cecilia to establish Burney as a Gothic novelist.