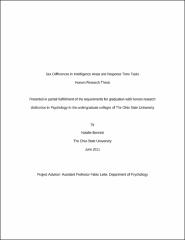 Previous research has shown that although there may not be sex differences in general intelligence, males tend to outperform females in the areas of spatial ability and mechanical reasoning, whereas females have an advantage in verbal ability and perceptual speed. Following these findings of sex differences in particular areas of intelligence, the present study tested for sex differences in participants’ performance in response time tasks of different levels of complexity. We collected data from thirty-five Ohio State University students. In the first session, participants were administered the Wechsler Adult Intelligence Scale IV (WAIS-IV) to produce IQ estimates. In accordance with previous research, we predicted that females would have higher scores on verbal ability and perceptual speed WAIS-IV subtests. In the second part of the study, participants completed four response time (RT) tasks of different levels of complexity. We hypothesized that males would outperform females on the signal detection task (the simplest of the RT tasks), whereas females would outperform males on the lexical decision task (reliant on verbal ability). Results showed that males did indeed have faster RTs than females in the signal detection task. Additionally, male and female RTs on this signal detection task correlated differently with subtests of the WAIS-IV. However, no sex differences were found on any of the other three RT tasks. Furthermore, no sex differences were found on any subtests of the WAIS-IV. These findings show that although sex differences may not be obvious in intelligence or RT performance, males and females may use different resources to complete the same task.