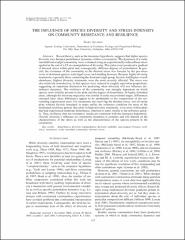 Recent theory, such as the insurance hypothesis, suggests that higher species diversity may dampen perturbation dynamics within a community. The dynamics of a rocky intertidal macroalgal community were evaluated using an experimentally induced heat stress applied at the end of a 15-mo manipulation of diversity. This pulse event produced a gradient of thermal stress within plots and, consequently, different degrees of perturbation. In general, the resistance of the community to the thermal stress was forecast by the pre-stress cover of dominant species, total algal cover, and standing biomass. Because higher diversity treatments, especially those containing the dominant algal group, fucoids, had higher overall abundance, highest diversity treatments were the most severely affected. The stress was also relatively nonselective, in that species were reduced in roughly equivalent proportions, suggesting an important distinction for predicting when diversity will not influence disturbance dynamics. The resilience of the community was strongly dependent on which species were initially present in the plots and the degree of disturbance. In highly disturbed areas, although the recovery trajectory was similar in early successional stages, differences emerged later; these differences appear to be attributable to the composition of the surrounding regeneration pool. For treatments not receiving the thermal stress, low-diversity plots without fucoids remained in states unlike the reference condition for most of the monitored resilience period. But plots in high-diversity treatments, even areas within plots that had experienced moderate disturbance, returned to states similar to the reference quickly. Thus, resilience (but not resistance) results are consistent with the insurance hypothesis. Overall, diversity's influence on community dynamics is complex and will depend on the characteristics of the stress as well as the characteristics of the species present in the community.