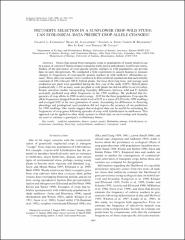 Genes that spread from transgenic crops to populations of weedy relatives can be a cause of concern if fitness-related, transgenic traits persist and enhance weed invasiveness. Studies of the prevalence of crop-specific genetic markers in wild populations can provide data on such introgression. We conducted a field experiment in eastern Kansas to measure changes in frequencies of crop-specific genetic markers in wild sunflower (Helianthus annuus). Three allozyme markers were monitored in three artificial populations that each initially consisted of 100 wild and 100 F1 hybrid plants. Survival, flowering time, and average seed production per plant were quantified during the first year of the study (1997). Hybrid plants produced only 1–2% as many seeds per plant as wild plants but did not differ in survivorship. Simple selection models incorporating fecundity differences between wild and F1 hybrids accurately predicted crop allele frequencies in the 1998 seedlings. We predicted that frequencies of crop alleles in 1998 would average ~0.03 for the three populations. Crop-specific allele frequencies dropped from the initial level of 0.25 to a mean of 0.03 in the 1998 seedlings and averaged 0.05 in the next generation of seeds. Accounting for differences in flowering phenology and predispersal seed predation did not improve the accuracy of our predictions for 1998 seedlings. Our results suggest that ecological data can be useful for estimating the frequencies of crop genes following episodes of crop–wild hybridization in sunflowers. This approach can be applied to other study systems in which data on survivorship and fecundity are used to estimate a genotype's evolutionary fitness.